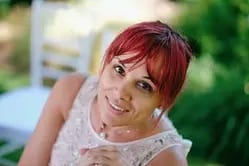 As the first in what I hope will become a series of interviews and articles about what people and companies are doing during the closure of theatres and isolation of individuals, I approached Dr. Corinna Di Niro.

Her Doctorate is in Commedia dell'Arte in 21st Century Australia with reference to Antonio Fava's method, a world first, but she is now expanding her work into other areas. Her company, Commedia con Corinna, has relaunched the website as Stage Secrets to reflect this widening of her work.

Dr. Di Niro is one of the most prominent and innovative practitioners and researchers in the field of Commedia dell'Arte in Australia and she has studied and collaborated with the acknowledged Italian master, Antonio Fava, whose family has been involved in the profession for generations. Her most recent work is truly ground-breaking and embraces modern technology. Aside from running her own highly successful theatre company, which I have had the pleasure to have reviewed on a few occasions, she teaches privately, has taught at NIDA (National Institute of Dramatic Art), and also instructs school drama teachers.

I asked how this shutdown is affecting her and what work she is doing during this time. Here is her reply.

It's been a time of change as the world comes to terms with the devastating effects of COVID-19. What I am doing primarily right now is writing, but to get to that I think it is important I give you some context as to how, why, and what writing is doing for me during home isolation.

Since the last time you published a review about me in 2015, I've been teaching at the tertiary level in a range of performance, media, and communication areas, continuing my work in Commedia dell'Arte, and applying my ongoing research in the field to other creative projects. The literature on Commedia, of course, is extensive and, with everything, the more you research the more you know, so I'm always reading other people's contributions where possible and contributing to the creative field more broadly when I can.

In the last two years or so, I became really fascinated by the role of the audience in Commedia, and how essential they are to the performance, almost like another character. I was also becoming quite fascinated by AR/VR and I wanted to see how I could use VR in a live theatre show. I combined these two ideas and, in 2018, I pitched an idea to my head of school at the University of South Australia to conduct a creative research project involving students and industry to attempt to turn one audience member into a character of the very show they came to see, using VR. It was quite the experiment!

This was not, of course, a Commedia production. A lot of research went into what it would mean for an audience member to be spontaneously turned into an actor and it became apparent that fear levels would be kept to a minimum if both the show and the character they were asked to play were already known. With this in mind, I, with the help of the amazing technical team the University of South Australia and my industry collaborators, staged a short version of The Wizard of Oz and ask the audience member to play Dorothy.

It led to an invitation to deliver a TEDx talk about it the following year, which I felt very honoured to receive. That was the first time that I had led an academic creative research project. I learned a lot from the experience and it sparked my desire to give it another go.

2019 was quite a big year for me. Earlier in the year, I was invited to give a lecture on Commedia in a 21st-century Australian context for the B.A. (Fine Arts) cohort at NIDA, I won a grant from Multicultural Education and Languages Committee to work in a high school for 10 or so weeks to teach and help devise Commedia plays, I was also at two other prominent schools in Adelaide doing a similar thing and, of course, keeping my Commedia con Corinna business active. In August I gave my TEDx talk and, immediately after, I began directing my next creative research play, Geoff Gilham's Bone Cage, for a conference about domestic violence held at Flinders University later that year, which I was presenting at with my colleague, Dr. Amelia Walker.

The issue of Domestic Violence in Australia is something close to my heart and the astronomical rates of women being murdered by current or former partners here, pushed me to want to do something to activate social change. What drew me to Bone Cage were its universal qualities, which are steeped in Commedia history, and how through careful positioning of the audience, I could evoke certain reactions from them. What's great about Bone Cage is that its use of metaphor makes the play universal and so I can stage the play to suit any social/political/topical issue.

The last thing that I did in 2019 was to make a return to Commedia, but in a more collective way. It's coming up to almost 20 years that I have had something to do with Commedia, my first play being way back in 2002 and, during that time, there have been some wonderful collaborations that I've cherished. What I've noticed in Australia, however, is that we all tend to operate in our own states, which is probably more due to being practical and cost-effective considering how big our country is. As much as I'd love for us all to come together to perform a Commedia play, this is quite a challenge when we live so far away, and even more so now due to COVID-19. In an effort to find a way for at least some of us to work together, without the need to travel and be out of pocket, I pitched a book idea to the publisher, Routledge, that discusses ways of contributing to Commedia dell'Arte in the Asia-Pacific region, and put out a call for chapter proposals from Commedia practitioners, educators, scenographers, and scholars.

I'm focussing on the Asia-Pacific region because it's not widely discussed in Commedia literature, yet, in this region, there are so many wonderful people contributing to Commedia in valuable and meaningful ways. I have colleagues in New Zealand, Indonesia, and India, for example, who are doing tremendous work in Commedia, as well as my colleagues in Australia. This book will not only give contributors an opportunity to discuss their practice in response to questions posed, but it will respond to the growing interest of the revived and hybridised Commedia dell'Arte genre broadly and, in doing so, give an international audience the opportunity to learn about the ways in which Commedia is performed, taught and received throughout the Asia-Pacific region.

To return to your original question about how the shutdown is affecting my work. I am busy writing and doing a lot of Zoom chats. My co-editor, Dr. Olly Crick, lives in the UK, so it's often fun to work out when's the best time to video chat with one another. I had planned, pre-COVID-19, that I'd be working mostly from home this year to concentrate on my publications as I'm working on a number of other creative outputs as well. It's been great to see what my fellow Commedia practitioners are doing in response to this crisis. Tony Kishawi, for example, has developed some great online material and courses, which is definitely a great way to keep the genre alive, and he is doing terrific work in this space. While I have also made some of my Commedia resources available online, for me, while I am homebound, working on this book is my way to stay in contact with my Commedia contemporaries, and help keep the spirit of Commedia alive through acknowledging the work of others and contributing to the performance, practice, and literature of Commedia dell'Arte in the Asia-Pacific region.