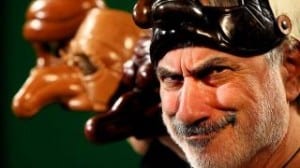 For the first time ever, maestro Antonio Fava, world expert of Commedia dell'Arte, will be in Adelaide! Presented by Corinna Di Niro in-conjunction with an array of supporters, Antonio Fava and special guest Martina Sechi will perform the World Premiere of Pulcinella Furioso, written and directed by Antonio Fava.

Pulcinella Furioso is an authentic southern Commedia dell'Arte performance calling on original techniques, styles, sounds and physicality of the 16th century. Witness Antonio Fava perform the character of Pulcinella as it was passed down to him by his father!

This event aims to bring together cultural groups, celebrate language diversity, promote the Italian arts in South Australia and create a greater appreciation for the Commedia dell'Arte.

Commedia dell'Arte is the source of Punch and Judy, circus clowns, physical comedy, farce, many musical comedies and comic operas and other genres that we know and love today.

Corinna Di Niro is completing her PhD in Commedia dell'Arte at UniSA and she has brought Fava here as a part of her studies. She studied under him in Italy in 2004 and she is now the foremost practitioner in Australia. These are two performances that are not to be missed.