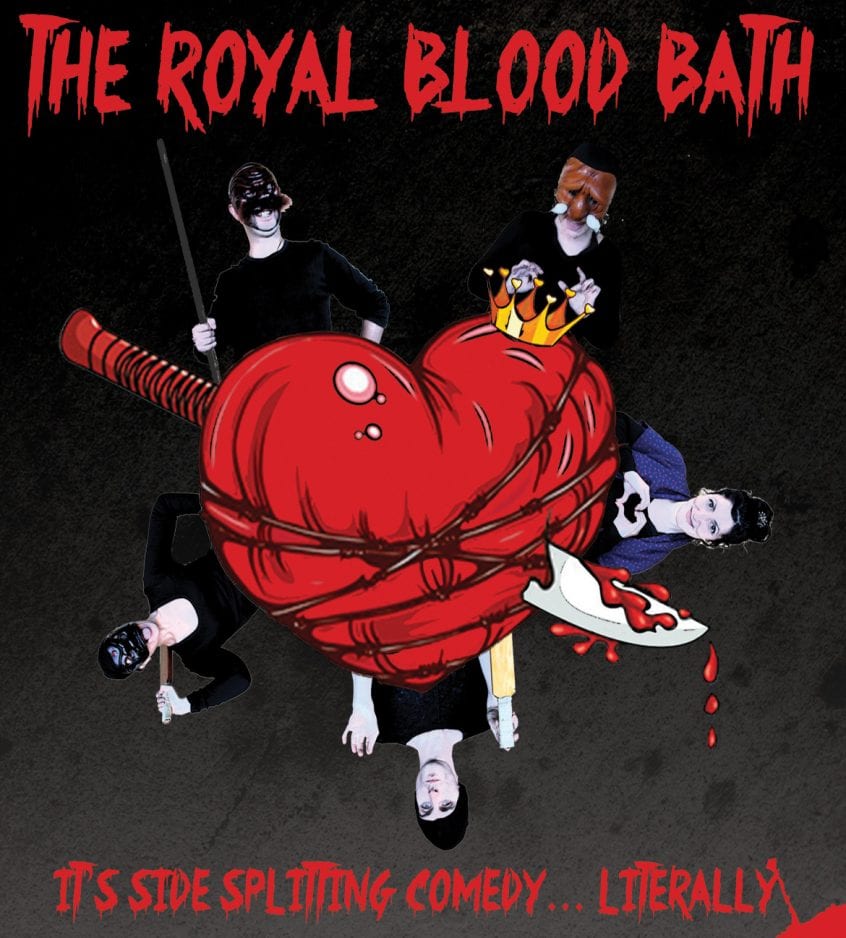 Adelaide Fringe 2015: The Royal Blood Bath Is Rare Commedia dell'Arte At Its Best.

World Commedia dell'Arte Day could not have been a more appropriate time to see The Royal Bloodbath, the latest performance from Commedia con Corinna, this time in conjunction with Werdna Theatre Productions. Corinna Di Niro or, more accurately, Dr. Corinna Di Niro, is a world leader, being the first person to gain a Ph.D. in Commedia dell'Arte, She has studied performance with the great master, Antonio Fava, in Italy, has taught at the National Institute of Dramatic Art in Sydney, works extensively with school drama teachers and performs for their students, and has recently returned from a teaching tour of Europe. One, therefore, has high expectations of a performance that she has created. As with previous performances by her group that I have attended, those expectations were greatly exceeded, further enhancing her reputation.

For this production she has turned to the 'Opera Regia' style of Commedia dell'Arte, tragedy in Commedia, a rarity anywhere, and never seen before in Australia. It is a form in which familiar stock characters appear, but also in which others that are unfamiliar, and mythical creatures like Satyr (satiri) might also appear, and in which characters die, killed in bloody fights and massacres.

Productions and events that are rare, new, innovative, clever, exciting, or exceptional, are surprisingly common in Adelaide. It seems to be a city in which the Arts are encouraged to move out of the comfort zone as much, and as far as possible. The fact that, in a Fringe with vast numbers of events, something that is different, such as this, can command full houses attests to the wisdom, and desire for more than just entertainment, of Adelaide theatregoers. 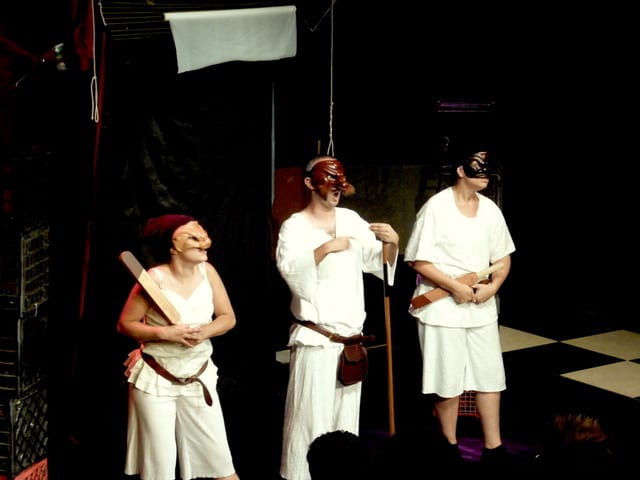 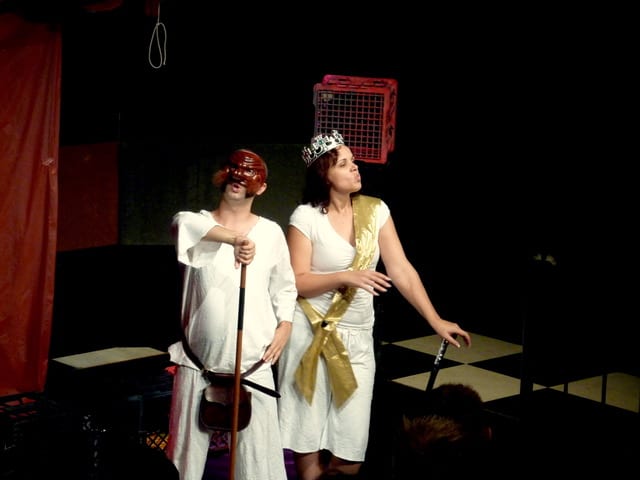 This was exactly what people here love to see, something that they have never seen before, presented by people at the top of their field. There really have to be further public performances for those who were unable to get tickets, and those who will be attending 'schools only' performances that are coming up are sure to add to the growing number of Commedia fans after seeing this production.

King Edward and Queen Beatrice are viewing the imminent wedding of their son, Prince Roberto, and his beautiful fiancé, Clementina, with considerable dismay. The lecherous King wants to get rid of both his son and the Queen, and win over Clementina for himself. The Queen wants to get rid of Clementina, because she will cease to be Queen after the marriage, and also wants to be rid of the King and reign in her own right, taking over the royal treasury.

Setting the story in the Kingdom of Adelaide makes the audience their citizens, and also allows the cast to poke fun at the Government in Canberra and other current affairs. The lampooning of our current Federal politicians, of course, went down very well with the audience.

With only four people in the cast, there is a lot of role changing required to portray the numerous characters, all accomplished using the traditional masks and simple costume changes. All four performers, incidentally, have studied with Antonio Fava, which has much to do with their great rapport.

Werdna Theatre Productions, Mariana Dias (Portugal) and Andrew Crupi (Australia), join Di Niro and one of her troupe, Jonny Lambert, for this packed hour of laughs, craziness, murder, and mayhem. For their primary roles, all unmasked characters, Corinna Di Niro plays the role of the Queen, with Andrew Crupi as the King, while Jonny Lambert plays Prince Roberto and Maria Dias plays Clemetina. the equate to the traditional roles of La Signora, and evil Capitano, and the two Lovers.

Many of Commedia's favourites are there too, including the zanni, with Il Dottore, Pantalone, Arlecchino, and Pulcinella and other servants, among others that fans of the genre will know well. Not that one needs to know a lot, if anything, about Commedia to enjoy the performance.

From start to finish this had everything that one could want, music, laughs, chases, devious doings, some interesting use of a rotating clothes drier rack and plastic crates and, of course, that hilarious bloodbath, which saw the front row of the audience provided with a waterproof shield to keep the 'blood' and 'internal body parts' off of their clothes, and more than enough dead bodies to keep any lover of Shakespearean tragedy happy.

The performances by these four enthusiastic Commedia experts are impressive, switching instantly from one character to another in the blink of an eye and entirely consistent within each character that they play. Their superb comic timing goes without saying, and their use of varied pace, becoming frenetic during the massacre scenes, is impeccable.

If you see that Commedia con Corinna is staging a production in the future, race for tickets, and keep an eye open for return visits by Werdna Theatre Productions, too. These companies are world leaders in Commedia dell'Arte, trained by a master of the art whose family has been involved for generations, the brilliant Antonio Fava.