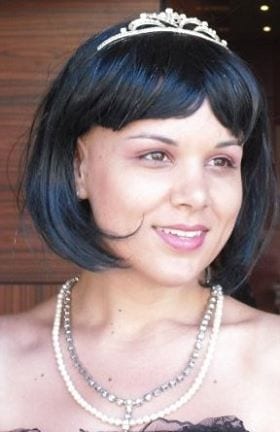 Saucy, sassy and sly, iSize takes your standard burlesque routine and upsizes it. Literally. Juxtaposing smooth bossa nova rhythms straight from a demure sixties cocktail hour with a very modern PowerPoint presentation, Miss Direction delivers a whip smart show that exposes the pitfalls for dames in today's dating scene. Using her own special 'app', an instructional show and tell educates the audience about the shortcomings of selecting the wrong man.

Calling on Comemdia dell'Arte to inform its ribald social satire, iSize urges the fairer sex to take matters into their own hands and call it how they see it. Miss Direction's mostly willing male participants, plucked from the audience, didn't know what they were in for when the objectifying gaze was turned on them. Stripping these hapless victims to the waist and subjecting them to a thorough assessment of their, ahem, dating potential, Miss Direction's role reversal act was a rollicking romp. That one of those men opted to return to his seat rather than be sized up made Miss Direction's point perfectly, that the double standard still well and truly exists.

iSize cunningly addresses issues of gender inequality while being thoroughly fun and naughty. No death by PowerPoint this presentation, the crowd at Nexus Cabaret cheered and jeered and lapped it up. By the end of the routine, we were all begging, 'Please. Miss Direction, I want some more'!